Are You Doing Christian Separation Wrong?


I'm first going to start out this post by saying I am not writing a treatise of Biblical separation, so this is not a naïve attempt by me to pen an expose on the entire topic. You can read whole books and hear long sermons about it. If you'd prefer to consider this a small rant on some error that has gotten under my skin time and time again, feel free.
There's been a nagging in my conscience to address this issue for a several years now, and I can't hush it up any longer. Biblical separation is an important issue for Christians, probably more so now than in any other time in my generation. But I've been on the wrong end of practicing separation on several occasions, and now that I see how and why I was, I not only repent of it, I find it grievous to find others making the same mistake.
There is a place for separation. 1 Corinthians 5:11, the pivotal verse upon which the doctrine spins is clear. However, if you consider the overall arch of the New Testament as regards the issue of brethren who have sinned, it is also recognizable that the practice of separation is less about not sullying our own self-righteous selves, than it is to minister by way of reproof and restoration to whomever it is we intend to separate from. There's an easy, brief way to summarize this: 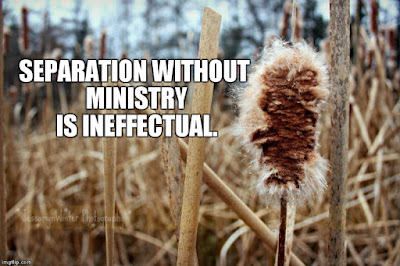 That being said, what kind of Christian wants to be ineffectual? Therefore, I have to ask, are you separating from someone without ministering to them? I have seen many Christians caught up in a sinful lifestyle or making an unbiblical decision that will impact their lives without one single Christian stepping forward and talking to them about it, finding out if they understand what they are doing, asking them about their reasons for such a decision. Yet, I've seen some of these same Christians going mute toward them, stepping back, and having no contact or interaction when the door is clearly open to discuss the problem with the offender. This kind of response comes off only as a great big, Christian cold shoulder. One can only surmise that those who do this are "separating" when in fact, they are guilty of prideful, self-righteous arrogance, because it is left to the person being "separated" from to try and figure out why so-and-so isn't talking to them or taking part in their life event or acting stand-offish. And having watched this close up, I can tell you that most of the time the person being "separated" from is absolutely clueless. So they go on their way either wondering what the problem is or shrugging their shoulders without caring, because the relationship is broken -- not in a helpful way.

Christians who separate without a verbal discussion gain no respect for their cause or belief.

On the other hand, when there is discussion, the person being separated from may not agree with their brother's position, they may not turn from sin, they may not immediately respond; BUT, they will be made aware that they are in offense of the Gospel and that the responsibility is on them for what they do about it. It is error to assume that "they know they're wrong". They often don't.
WHICH brings me to another point. I have watched, with great dismay, many staunch believers separate in this cold-shoulder fashion based upon mere circumstances and presumptions without ever having talked to the individual to see if such things are true. They determine that "sin is at the door" when, in fact, it might not be (and in some of my observation and discussion with supposed trespassers it isn't, yet the individual may not be given the opportunity for explanation). This is the height of spiritual arrogance. It is judgment in its most negative form (not the "righteous judgment" the Bible tells us to practice) and it seems that it frequently stems out of gossip -- I'm sorry -- praying for someone.
Who has not experienced a discussion with a fellow believer or two, even if it's within your own home, about the circumstance of another Christian whom they believe is doing something sinful? Yet, how often has that same discussion led to anyone going to that person and addressing the situation and finding out the facts? People are really, really good at hashing out the horrors of someone's choices and "taking a stand" against an imagined sin without EVER going to that person directly and ministering to them!
Does it sound like I'm yelling? Well, my heart is.
If you are considering a "stand" against someone's action, or if you are about to separate from an individual, you had better go to them first to find out if it's truly warranted and Biblically mandated. Otherwise, you are guilty of spiritual arrogance and pride, and to someone who may need your ministry, that is probably the biggest of sins.

Posted by Naomi Musch at 9:31 AM No comments:

When Heroes are Not Heroic: An Inside Look at "Blue Columbine"

Blue Columbine, book one in the Grace Revealing series by Jennifer Rodewald

Welcome, readers! This week we're going behind the scenes of Jennifer Rodewald's new book, Blue Columbine! Find out why her hero, Andrew Harris, drew such a reaction, and why this "non-heroic" hero makes the perfect star of this beautiful contemporary romance.

The main character isn’t your typical Christian Fiction hero. What is he like?

Andrew Harris insists on living on his own terms. Angry because of life’s injustices, he is determined that failure will not cross his path again. He is also adamant that he is not an alcoholic. When he reunites with Jamie Carson, finding her to be rooted in the faith they’d grown up with, and every bit as sweet and lovely as he remembered, he is plunged into an emotional whirlwind. Guilt, a longing to be better, frustration that he is not enough, and a rekindled love for his childhood sweetheart all swirl inside with maddening strength. But for all his faults, he is still loyal, supportive, and generous when he wants to be—all qualities that keep Jamie’s attention and devotion. Which keeps their close friendship—edging on more than friendship—complicated, to say the least.

What was the hardest part of writing this story?

This is a tough one, because the greatest difficulty didn’t come during the writing part. The hardest thing was taking in the amount of very strong negative reactions to Andrew as a Christian fiction character during the critiquing stage of the novel. Andrew’s a mess. An alcoholic in denial, angry at life and at God, selfish, and overall just not pretty. I knew that, but I didn’t expect to have vehement reactions insisting that such a character did not belong in Christian fiction. One comment labeled him “unredeemable.” That broke my heart, because as I shared before, God reminded me through this story that no one is beyond the Hand of Grace. I think it’s important that sometimes Christian fiction confirms that truth, even if it means starting with messy characters.

Where did Blue Columbine, the story, come from?

I’m not sure there’s one single, straight shot answer to that. The story unfolded in my mind and I was compelled to write it. I’ve had several years to look back and wonder, “Why this story?” since it first gripped me. Looking at it from hindsight, I think God was pouring truth into me through this book. I was at a point in my life when I was praying for loved ones…and losing hope. I see now that God was teaching me that nothing is beyond His reach. I needed to see that, to believe it again.

What messages/ themes do you hope your readers will get out of this book?

The first is this: NO ONE is beyond redemption. No one. I need to know that, because I love some messy people. God showed me through this book that my prayers do not go unheard, that His hand is more powerful than I give Him credit for, and His time and storyline are not necessarily mine.

What an amazing message! This book's hero proves that when our characters are not perfectly heroic, that only proves that God is! Thank you for sharing your book with us.
Now for a closer look at this book--and the gorgeous cover that sets the tone! 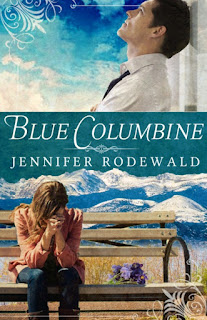 Childhood sweethearts reunite, but Andrew is not the boy he had been, and Jamie hasn’t changed. Their connection, however, outlasts time and offense.

Loyalty, love, and then betrayal….For Jamie, one thing becomes clear: Andy needs a savior, and she cannot be it. Will Andrew allow the hand of grace to redeem his legacy of addiction, or will he and Jamie remain the casualties of heartbreak?

What her readers are saying:
~ “Delicate. Humorous. And plumbing the depths of God's redeeming love.”

~ “This book does not disappoint. Instead it takes you through the emotional upheaval of loving someone with a problem you can't solve--and lets you witness the glory of the One who can.” 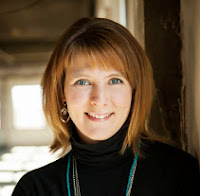 Jennifer Rodewald is passionate about the Word of God and the powerful vehicle of story. The draw to fiction has tugged hard on her heart since childhood, and when she began pursuing writing she set on stories that reveal the grace of God.

Aiming to live with boundless enthusiasm, her creed is vision, pursuit and excellence. Blessed with a robust curiosity, she loves to research. Whether she’s investigating the history of a given area, the biography of a Christian icon, or how nature declares the glory of God, her daily goal is to learn something new.

Jen lives and writes in a lovely speck of a town where she watches with amazement while her children grow up way too fast, gardens, and marvels at God’s mighty hand in everyday life. Four kids and her own personal superman make her home in southwestern Nebraska delightfully chaotic.

She would love to hear from you! Please visit her at authorjenrodewald.com or connect with her on Facebook. Author Jen Rodewald.
Posted by Naomi Musch at 7:33 AM 1 comment: