My Pick for Favorite Fiction of 2018 - A Book Review, with Insight for Writers

As many books as I've read and enjoyed in 2018, none have touched me as profoundly as Joanne Bischof's Sons of Blackbird Mountain. In fact, I just finished the ARC of Book Tow on my Kindle, and OH. MY. GOODNESS The combo should be a movie. So good. You really want to read both to go the full circle of the story. Book two is available for pre-order.

Ms. Bischof's story of a young Irish woman finding a new beginning in the home of three Norwegian brothers, who live on a farm in the wilds of Appalachia, is perfectly plotted and beautifully written. Set in the 1890s, every character grabs you with a depth of feeling and personality in a truly unique story--especially the three Norgaard men. (Okay, they rather reminded me quite a lot of my three rough and tumble sons who also farm together and whose birth order and personalities coincide almost bizarrely with these characters. Maybe I was biased the moment the Norgaards started cleaning their guns on the kitchen table and one of them climbed up on the high beam to have a look-see down his rifle sight at the Klan approaching their mountaintop home.)

I heard rumblings all around social media about this story before I finally go it on my TBR list, but I'm so glad I finally did. There are so many nuances to this story that will touch you deeply, from the mounting conflict between the main characters as well as outsiders, to the beautiful and tender love story, to the realism and rich history... If you haven't gotten hold of this one yet, add it to your list!

THIS BOOK IS A SPECIAL TREAT IF YOU ARE A WRITER.

As I mentioned above, Sons of Blackbird Mountain is perfectly plotted. Ms. Bischof does an exceptional job of illuminating back story in a way that advances the plot and character development yet never dumps information on the reader. She also takes us deep into the characters' points-of-view by consistently showing without telling. The way she presents the POV of a deaf-mute is artistic.

Read it, highlight it, take notes to see how it's done. If you want to develop your own voice and writing style, it's imperative to read good writing. Ms. Bischof is the kind of writer whose works you want to have on your shelf or Kindle just to study the craft well done.

I am pleased to end  2018 by welcoming my special guest, award-winning author Nike Chillemi, who recently released her new romantic suspense novel Courting Danger. She's going to share the answers to a couple of questions that intrigued me about the book. I think you'll find the background to this novel interesting too. 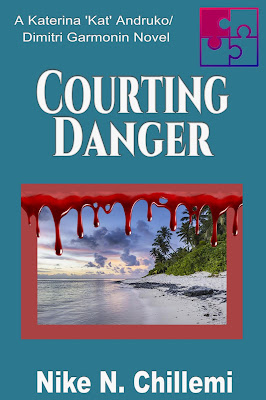 I've so enjoyed developing a friendship with Nike on social media over the years. Even though we've never met in person, she is one of those people who I would count as a good friend. She has also consistently published page-turning detective fiction with great romantic threads. Here's what her newest release is all about:

About the Book:
Newly installed Pelican Beach, Florida detective Katerina "Kat" Andruko fears the prime suspect will get off in the murder of a teen with the help of the department's forensics psychologist, a man she's just started to trust.

This case has national security implications that gives former US Army Ranger, Dr. Dimitri Garmonin a chance to work with the FBI. The case could give him the chance to obtain the funds needed to expand his small Behavior Analysis Unit. He's unmoved by the chic FBI agent sent to assist but is intrigued by Kat with whom he shares a Slavic heritage.

Kat and her partner detain two wrong suspects, giving the department negative press. The predator turns his anger on Kat, targeting her. Can Dimitri use his profiler skills to catch this killer before he hurts the woman he's growing to love?

Questions for Nike:
Q:  I find this set up intriguing. The shared heritage angle is unique. Please give us some more insight into your main character(s). What does he/she do that is so special?

A:  In COURTING DANGER, both Det. Katerina "Kat Andruko and forensic psychologist Dimitri Garmonin have a Slavic background and so do I. This gave me an opportunity to draw from what I know (culture, food, religious attitudes), what I grew up with. Though parts of my psyche are imbedded in each of them, neither of them are me…not even close. They are defined personalities I created. They both share a few very special attitudes and values. They both live and thrive in modern America but have deep respect for old world Slavic values. In the modern world they live in and work in professionally, each wants to protect the innocent, find justice for victims, and keep Pelican Beach, Florida (the fictitious city they live in) safe.

Q:  This sounds like a pretty intense story too. How did the idea come to you?

A:  A while back the invasion of Crimea by Russia was 'the story' on all news television channels, and it flooded the internet. The image of Ukrainian Orthodox Priests in their robes standing in the war zone became seared in my memory. They defied Russian tanks holding Bibles and wooden crosses. It's like they were saying, "You have to come through us to get to our towns and the people." My heritage is Slavic. I know the culture, the foods, the religious values. Out of this COURTING DANGER evolved. Kat is an American girl who spent two years in Ukraine as a teen is now a detective in a Florida beach community. She teams up with Dimitri a Russian-born forensic psychologist who came to America as a boy. She initially distrusts him, still they must catch a killer. 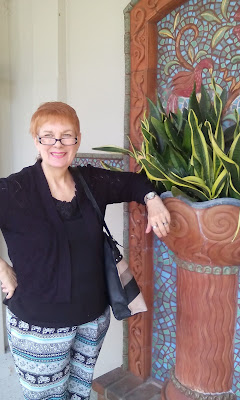 Nike N. Chillemi writes contemporary detective and/or suspense novels with a touch of wry humor, and there's often a national security twist to them. She likes her bad guys really bad, her good guys smarter and better, and a touch of the comedic. Her newest endeavor is COURTING DANGER.
Nike is the founding board member of the Grace Awards and its Chair, a reader's choice awards for excellence in Christian fiction. She has been a judge in the 2011, 2012, 2013, 2014, 2016, and 2017 Carol Awards in the suspense, mystery, and romantic suspense categories; and an Inspy Awards 2010 judge in the Suspense/Thriller/Mystery category. Her four novel Sanctuary Point series (out of print), set in the mid-1940s has finaled, won an award, and garnered critical acclaim. The first novel in the Veronica "Ronnie" Ingels/Dawson Hughes series HARMRUL INTENT won in the Grace Awards 2014 Mystery/Romantic Suspense/Thriller/Historical Suspense category. She has written book reviews for The Christian Pulse online magazine. She is a member of American Christian Fiction Writers (ACFW) and John 3:16 Marketing Network.  https://nikechillemi.blog/

Thank you for dropping by, Nike!
Posted by Naomi Musch at 1:34 PM 2 comments: