Thank you to our viewers, fans, and voters—this was a near record-setting post view for our five authors. Congratulations to all of your and thank you for participating. Some of the comments you received include:


Congratulations to this month’s Champion, Cindy Thomson, and Sofia’s Tune! 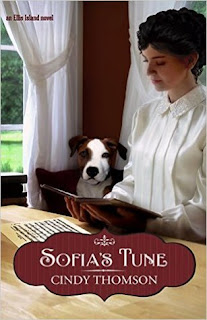 In Sofia’s Tune, we meet Sofia Falcone, a young woman who has been living in New York only a short time when she is stunned to discover a family secret, one that soon sends her beloved mother into a mental institution. Scrambling to keep her job and care for her mother, Sofia is convinced confronting the past will heal all wounds, but her old world Italian family wants to keep the past in the past.

During this time, she encounters Antonio, a Vaudeville pianist with a street-smart dog, seeking to discover why his father was mysteriously killed. Their crossed paths uncover a frightening underworld in Little Italy. Bringing the truth to light may cost Sofia’s mother’s sanity, Antonio’s career, and the livelihoods of countless immigrants. Change is on the horizon, but it may not bring what they expect.

· Sofia’s Tune has a musical theme. What can you tell us about the meaning of “tune” in this story?

Antonio is a vaudeville pianist who dreams of becoming an accomplished concert musician. His dog resembles Nipper of the “His Master’s Voice” advertisement for gramophones. There is plenty of music in this story, but the title refers to changing your tune, finding a different path for your life, as both Sofia and Antonio must do.

· Tell us about the dog on the cover.

Luigi is Antonio’s faithful companion who keeps reminding people of the dog listening to his master’s voice on the recording, as I mentioned. He’s well trained and a good judge of character. I really enjoyed adding a canine character to the story. Dogs are such an important part of many people’s lives. He is Antonio’s dog, but he really likes Sofia, as you can see on the cover!

Sofia’s Tune is the final novel in the series. However, I am planning on a novella, a sort of prequel, which will tell Mrs. Hawkins’s story. Mrs. Hawkins runs a boarding house for immigrant girls. Her story is told very briefly in Annie’s Stories. This novella will be free exclusively for my newsletter subscribers. (You can sign up on my web site.)
Next summer I will be releasing the sequel to my first novel, Brigid of Ireland. The stories are set in 5th century Ireland, and weave in a bit of fantasy and adventure. They are somewhat different from the Ellis Island series, but are still representative of our ancestors’ stories that should be passed down for us to carry on their legacy of endurance, faithfulness, and wisdom.

And speaking of wisdom, Sofia’s name means wisdom, and I hope readers will be inspired by the music in the book trailer, written by my friend from Northern Ireland, singer/songwriter Andy Rogers. 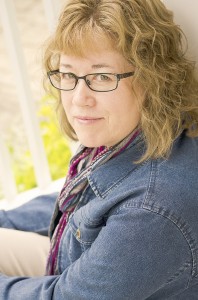 Cindy Thomson is the author of seven books, including her newest novel, Sofia’s Tune, the third book in her Ellis Island series. She also writes genealogy articles for Internet Genealogy and Your Genealogy Today magazines, and short stories for Clubhouse Magazine. Most everything she writes reflects her mission of “Writing the stories of our inheritance." Visit her at www.cindyswriting.com, on Facebook at www. facebook. com/cindyswritin g and on Twitter: @cindyswriting
Posted by Naomi Musch at 9:31 AM No comments:

Though I've always enjoyed such films such as Indiana Jones, The Rocketeer, Captain America, and so on, I've never read a deiselpunk (or ANYpunk) novel until now, but I thoroughly enjoyed K.M. Weiland's brand new release Storming, a deiselpunk that is set among the post war, air show, barnstorming circus era. Interestingly, I've read that sometimes deiselpunk can seem to glorify nazi-ism due to the nazi components in these stories, but Weiland's novel is a clear depiction of anti-fascism. (The fascists are the bad guys.) 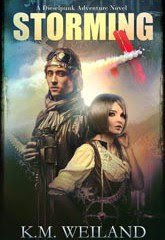 The story is full of intrigue from the very beginning, when barnstormer Hitch Hitchcock nearly flies into first one body, then another, tumbling out of the sky from who-knows-where. There isn't another sign of plane or anything else up there in the clouds. When he rescues the mysterious foreigner Jael she talks of Schturming, her home in the clouds, and for a while, there's the great mystery of what Shturming is, or where it's exactly located. The answer is quite a lark!

But there's so much more to Weiland's story. There's the traumatized little boy, Hitch's nephew, who hasn't talked in several years but is drawn to Hitch more than anyone else in his life, and about whom another mystery swirls. There's Hitch's estranged brother, who happens to be a town deputy, and Hitch is definitely flying around on the fringes of the law. There's the town sheriff himself, who has a hold over Hitch and knows just how to call in a favor, even more than once. There's Hitch's sisters-in-law who aren't ready to forgive him for his wife's death. There's his buddy Earl, who stands by him when the rest  of the circus only has use for his talents when it's in their favor.

And mostly there's Jael, the strange, strong-headed, daring girl who fell from the sky and became a flying circus pilot's dream as a wing-walker -- and something more. Weiland does a fantastic
job of pulling readers into the cares of these people and sets the final scenes in the heavens (no spoilers! Can't tell you about the actual Schturming!) full of bravado, daring do, and death-defying romance, familial love, and forgiveness. Oh -- and a great climax for the bad guys.

Like I said, deiselpunk is new to me, but I think readers who really seek out this genre would get a great kick out of Storming!

Posted by Naomi Musch at 3:23 PM No comments: