Love in Couple Dollars -- Grandparenting On

Yesterday I made a mad dash to town and whipped into the local dollar store for a quick pick up of some Christmas wrap and ribbons. While I was there, I received a grandparent blessing. It wasn't by anything directed at me. No, I was completely unnoticed, waiting in the checkout line as a conversation proceeded ahead of me. The gentleman paying for his purchases wasn't buying much, only a couple of items, at only a dollar a piece, but I could tell that a lot of love went into those few dollars.

He was a grandpa. He wore a smile. He talked about his grandson who was eight. I could tell how much he loved that child, because he knew what made his grandson happy. He told the checkout girl all about his grandson and all things he was fascinated by. This grandpa was looking forward to giving his small gift to that child and seeing his eyes light up with excitement. As the man took his purchases and pushed his cart to the cart return row, I stepped to my place at the checkout. But the man met someone else near the door a few feet away and the conversation was begun anew. He shared again some talk of his grandson who meant the world to him. I was blessed to hear the joy and love in his voice.

I am of that generation now that wants to brag on and show pictures of my grandchildren. If it were twenty years ago, I'd flip out my wallet and open an accordion of photographs. How convenient to have a cell phone! But it's one thing to have the pictures, and another thing to have their hearts. The man in the store, with his simple purchases and eager anticipation to bestow them, clearly hoped to have his grandson's heart. The grandson surely had his. The man knew what that child loved. They must talk often.

Yesterday I posted a Facebook picture of two of my grandbabies helping me in the kitchen. I was making pea soup. They were making -- you know -- havoc. One of them would shake his little two-year-old finger at his cousin with the admonition to "no throw stuff" and the other would respond -- you've got it -- by throwing stuff. One wanted to eat snitches of diced up ham. The other wanted to smash it on the counter top. One baby had to handle all the appliances and tools. The other was busy pulling jars out of my spice drawer. 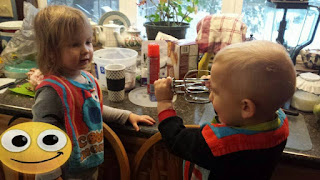 And my living room... On most days it is strewn with toys from one end to the other. Blankets are askew on the couch. I have occasionally found the stray, dried up food item in bizarre places. But I don't mind. I am privileged to get to see my grandchildren often, and I don't take that lightly. I know many grandparents would love to be able to spend more time with the little people and young adults they think about and pray for daily. I understand that I am blessed.

So what am I to do with such a blessing? Here's what I think: I am to learn their hearts. I long to know them well. To be able to understand what they care about. To share Jesus with them. To pray for them. To hold them close at every opportunity. I am to find tangible ways to reach out and support them, whether near or far, be it by a phone call, a snap chat, a story, a snuggle, or with a gift. I am to keep the conversation open between us as they grow, as much as possible.

It isn't effortless. It is proactive.

I was blessed by the man's love for his grandchild in the dollar store yesterday. I was inspired to always let my own grandchildren know that they are loved. It's a huge responsibility really, to be there for them as long as God allows. To walk alongside their parents and be their encouragers, their kisser of owies, their prayer warriors, their passer-on of legends, their heart-protectors. I am blessed to understand that all these jobs didn't stop when my husband and I raised their parents, but continues on into the next generation.

So I have to go now. I need to interrupt a school day with a couple text messages to some young ladies I love.

Grandparenting On~
Naomi
Posted by Naomi Musch at 9:26 AM No comments: