Lisa Lickel has done it again. She’s crafted another novel with a unique concept and characters as interesting and troubling as the concept itself. Innocents Pray asks the question, if four people are praying for different answers to the same situation, how will God answer all of them? 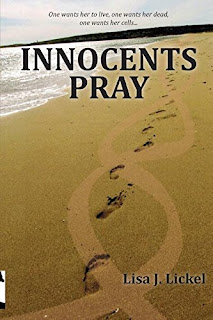 Lisa’s story is disturbing on several levels – from the woman who goes away to die without telling her family what she’s doing, to the doctor creating his own version of medical ethics, to the son who is described on the back cover as “a whisper from the edge of reason”, to the conflicted hospice chaplain with a connection to each. Each individual is struggling with a huge internal conflict and question for which there is no pat answer, and wondering how the story can possibly end is what keeps us turning the pages. The characters themselves are often not very likeable, yet so real in the ways they are troubled that we care for them in their brokenness.


Lisa tends to write from a variety of interesting points of view, which creates a much more fascinating web than if this story had only been written from the viewpoints of, say, the MC who has cancer or Able, the hospice chaplain whose integrity is at odds with what he is being asked to do. She deftly goes between their points of view in first person, third person, and from a mysterious interchange on a weblog that keeps us guessing as to who is hosting and playing devil’s advocate on the site.


I would view Innocents Pray as a both literary and experimental women’s fiction, and Lisa is up to the task of presenting it to her readers. If there is anything critical, it would be that there was a time or two I felt slightly uncertain if I was understanding a particular relationship (near the end) clearly (that might have been me).


Intriguing on an eerily realistic level!
Posted by Naomi Musch at 10:24 AM 1 comment: