Novel Brainstorming is the B.O.M.B.

I don't know if I've ever outlined two novels exactly the same way, but there are always similarities, and there is always that first brainstorming session, the one where ideas flow in synopsis fashion. It's that part of the process that gets me real fired up to write the story, because let me tell you, as a writer, brainstorming is the B.O.M.B.! It is where I quickly riddle out these things:

B. Begin to meet the characters
O. Open with the initial conflict
M. Mind the major turning points
B. Bring it all together

Once I begin the serious work of outlining, a lot of that initial synopsis might change, but that's okay. SOTP writers (that's seat-of-the-pants for those who aren't familiar) may not take their idea to that next level, but everyone starts someplace, and in a way, a written synopsis is a form of outline.

So today I brainstormed a new novel. I've been thinking about my characters. It's a sequel, so one of them had an established history and personality. The other main character needed a lot of fleshing out.

What. A. Blast!  (I promise not to write an acronym for that.)

Just following the trail down which my brain led me as the idea spilled out onto paper, from one thing to the next, was like dreaming wide awake. It's terrific fun, and totally freeing, because I can go back at any point and change something if I get a better idea later, or if the one I initially create isn't working. Some people hate beginnings, but I don't know why. It's the part during which we, as writers, first get to live the adventure.

Themes come to me during this time. The primary theme usually shows itself pretty early on. During the actual writing of the book, I keep a close I toward the emergence of secondary themes. Those are then consciously layered in as I move forward. I must have that primary theme to begin though. Without it, I can't weave plot lines as effectively, nor can I entirely understand my character. So discovering theme as I brainstorm is important.

This morning, I had a pretty good idea of theme when, all of a sudden, an even stronger form of that theme presented itself. I mean...it sort of descended out of nowhere into the story, and I knew immediately that this theme was the one that would make the story resonate with readers. Wish I could tell you more, but that might ruin it... :)

Today I did something else different (for me). After jotting down my synopsis -- a mere couple pages, a very general overview of the story -- I went back and highlighted these things: 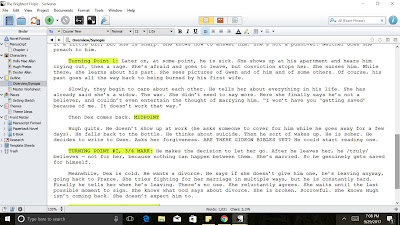 These points will all be broken down further when I begin the long plotting process, but this is just a simple synopsis. I marked these things to be sure they existed, because even if you don't use an outline, the mental shape of these things has to be there, or you don't really have a story.

It will be a while before I begin writing this particular story. For those of you who have read or plan to read The Deepest Sigh, this new idea is for the sequel to the sequel. Got it? Man... I love being a writer.
Posted by Naomi Musch at 3:32 PM No comments: