Today I want to share a cover reveal for an author I've come to greatly respect both in her writing and off the page. If you've never read any of Nike Chillemi's (a.k.a. The Crime Fictionista's) books, I can tell you that she always weaves a compelling Christian suspense that will keep you turning the page. Her new book is due out in a few days and is the sequel to this year's Grace Awards winning suspense novel Harmful Intent. Check it out! 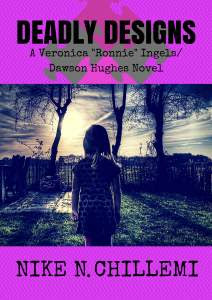 Private investigator Veronica “Ronnie” Ingels teams up again with Lt. Deputy Dawson Hughes to find a geeky radio broadcaster’s missing wife and young daughter. They fear the woman and child were taken by Islamic terrorists as revenge against a pro-Israel guest host who subbed on the talk show for a week. The investigation takes Ronnie and Hughes to manicured estates, interviewing a snobbish A-List society crowd, as well as to the seamy, drug-riddled underbelly of the fashion world. All the while, the specter of international terrorism hovers.

Ronnie is furious at both Hughes and the broadcaster for waiting two days to start the search. She knows the longer it takes, the less chance there is of finding the child alive. Talk-show host Ed Barton has been hoping-against-hope his pot-smoking, model wife is on one of her esoteric experiences and has simply taken the child while she romps for a few days. He doesn’t want to consider the other, more dangerous possibility…that his radio program has angered some very dangerous people.

Hughes, recently promoted to lieutenant in the TaylorCounty, Texas Sheriff’s Department, is on leave on a special assignment with Authorized Operations (AO), a clandestine, quasi-government agency operating out of a sea-side mansion on Long Island, NY. The only thing is, many politicians and government big-wigs claim the organization doesn’t exist.

Join Nike on Facebook or on her blog.
Posted by Naomi Musch at 8:20 AM No comments: