I'm writing to you from my recovery lounge (read: recliner). That's not really so unusual. It's where I usually write, but this time I'm on strict doctor's orders to lie low for a couple weeks while I recover from surgery. Turns out that, after many years, they discovered a hole/hernia in my diaphragm that needed patching up. I might not have ever known, except it gave me some real trouble back in July and threatened to do so again. So last week I went "under the knife" as we like to call it in the Musch household (too many reruns of Last of the Mohicans). They fixed up an umbilical hernia while they were in there and removed a lypoma that had been bothering me on my arm for over a decade. I've got little slices and dices all over the place!

~~~THANKFUL~~~
I'm SO thankful for what modern medicine can do. I had a similar umbilical surgery years ago that felt way more invasive. Jeff and I always thank our doctors and nurses for using the gifts and talents God blessed them with along with their training to care for people. We try to encourage them and let them know their work is greatly appreciated. It's a great reminder that "every good gift and every perfect gift is from above, coming down from the Father of lights in whom there is no variation, nor shadow do to change" -James 1:17.
~~~~~
My publisher surprised me with this sale on Mist O'er the Voyageur. It's been a long time since they've offered this deal. It's a good time to send a few copies to friends. (Maybe you know someone else who's recuperating from surgery or illness.)  The first two books in my Echoes of the Heart series are on sale too. Book Three just released in August and concludes the series with a big heart tug.

BOTH OF THESE DEALS LAST THROUGH TOMORROW, NOVEMBER 1ST. 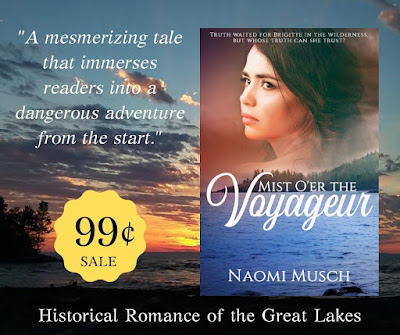 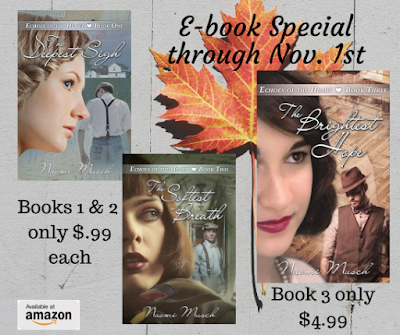