Welcome to the third installment in a series of interviews I'm hosting with heroes from the four novellas in Smitten's new romance collection THE HIGHLANDERS which just released on November 15th. Today I welcome Callan MacTavish from Jennifer Lamont Leo's The Violinist, a hero with secrets.

In 1915 Idaho, homesick lumberjack Callan MacTavish despairs of ever seeing his Scottish homeland again. With kindness and patience, music teacher Rose Marchmont reaches a part of Callan’s heart he’d long ago locked away. She sees beyond his rough exterior to the artistic heart beneath. He longs for more than he can offer her, but she doesn’t know about the secret trauma that keeps him from crossing the sea. 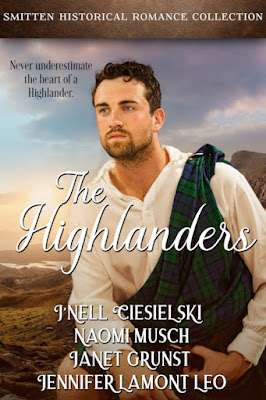 MRW - Hello, Callan, it’s nice to meet you. Thank you for your willingness to talk to me today. Were you as willing to share your story with Ms Leo so she could get it written down?

Callum - Nay. She had to draw it out o’ me. I’m not one to talk about myself.

MRW - I read your story, and I have to say, I found it amazing. I’d like to ask you a few questions about it, but don’t feel like you have to give anything away that you want to keep secret to readers. First off tell us about yourself and your background. Where are you from?

Callum - I grew up in Scotland, near the bonny, bonny banks of Loch Lomond, as the song goes. That happens to be the ancestral home of Ms. Leo’s relatives. Her birth name, Lamont, is a variation of Lomond and is as common as “Smith” in those parts. My da still lives there.

MRW - In the beginning of the story, you landed yourself in a hospital. How did that happen? In fact, how did a Highlander like yourself end up working as a logger in Idaho, USA?

Callum - I guess ye could say I took a trip to the United States and ended up stayin. I had to support myself somehow, and loggin seemed as good a job as any fer a footloose, single Scotsman. ‘Twas a misfortune between a ponderosa pine and my noggin what landed me in the hospital.

MRW - I see you have a previous injury. Anything you want to tell us about that?

Callum - Nay. Just to say it’s not out o’ the ordinary fer loggers to be short a finger or two.

MRW - When you were in the hospital, you were a little worried that Lars had discovered something secret when he was bringing you a few things. Want to tell us what that was and why you were nervous he’d found you out?

Callum - My journal. My chums in the loggin camp find it strange enough that I read poetry. I don’t need them knowin that I write it, too.

MRW - You’re different than most of the loggers in town who don’t mind living it up when they get paid and carrying on with women. So how do you like to spend your time?

Callum - I daunder aboot the town. I read Robert Burns. I write. I listen to music. I’m not a particularly excitin person to be around, but I enjoy my own company.

MRW - The first time you spied a certain Miss Marchmont, you felt embarrassed. Want to tell us about that incident?

Callum - I was with my chum Lars and he had no qualms about makin a scene, tryin to get her attention. Ye don’t go shoutin out to bonny lasses on the street that way. Plus my face was pretty banged up from the accident with the tree. I didna need her thinkin I was a lout.

MRW - You have an amazing talent, one you’ve been keeping hidden from most of the people you know in Idaho, especially Miss Marchmont. Can you tell us here what that talent is? If not, can you tell us why you don’t want Miss Marchmont—or anyone—to know you have a secret?

Callum - I didna want a lot o’ questions. I just wanted to listen to the lass play her violin and get to know her without a lot o’ fuss and feathers.

MRW - How about you tell us about a few of the other people in town? Anyone you find annoying or especially pleasant to be around?

Callum - Miss Marchmont’s sister is a wee bit high-strung. Her husband’s all right, though. There’s a dobber called Godfrey who swans about in his fancy motorcar. Could do without the likes of him.

MRW - I loved your story, Callan. I was blown away by a big surprise I never saw coming. It was a jaw-dropping moment. I’m sure readers will love it as well.

Callum - Much obliged to ye. 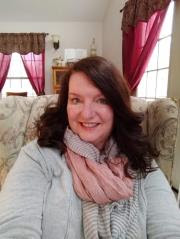 Jennifer Lamont Leo captures readers’ hearts through stories set in times gone by. Her first novel, You’re the Cream in My Coffee, won a Carol Award from American Christian Fiction Writers.  An Illinois native, she now writes from the mountains of northern Idaho.

News of the Northwoods

Sign up for my quarterly newsletter News of the Northwoods to catch the latest on my writing projects, grandparenting thoughts, family and spiritual happenings, with an occasional encouragement for homeschoolers and young writers too. I will never abuse your privacy by sending you anything beyond what we agree to or share your email with other entities. Read my entire Privacy Policy here.